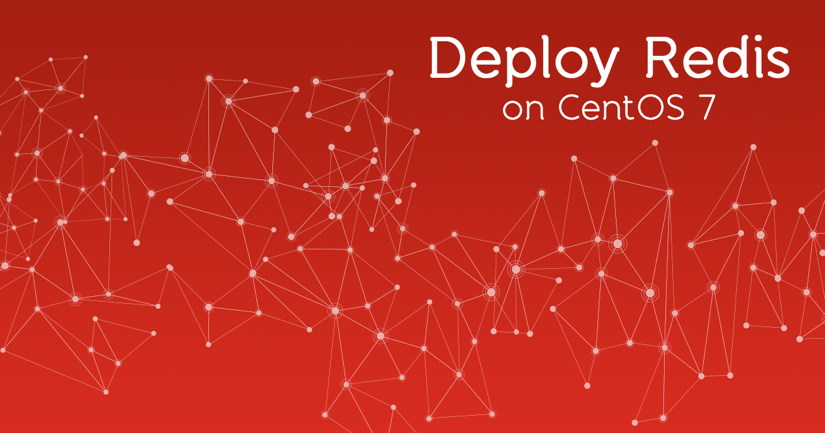 Redis is an open-source, in-memory data structure store which excels at caching. A non-relational database, Redis is known for its flexibility, performance, scalability, and wide language support.

Redis was designed for use by trusted clients in a trusted environment, and has no robust security features of its own. Redis does, however, have a few security features that include a basic unencrypted password and command renaming and disabling. This tutorial provides instructions on how to configure these security features, and also covers a few other settings that can boost the security of a standalone Redis installation on CentOS 7.

To follow along with this tutorial, you will need:

With those prerequisites in place, we are ready to install Redis and perform some initial configuration tasks.

Before we can install Redis, we must first add Extra Packages for Enterprise Linux (EPEL) repository to the server’s package lists. EPEL is a package repository containing a number of open-source add-on software packages, most of which are maintained by the Fedora Project.

We can install EPEL using yum:

Once the EPEL installation has finished you can install Redis, again using yum:

This may take a few minutes to complete. After the installation finishes, start the Redis service:

If you’d like Redis to start on boot, you can enable it with the enable command:

You can check Redis’s status by running the following:

Once you’ve confirmed that Redis is indeed running, test the setup with this command:

This should print PONG as the response. If this is the case, it means you now have Redis running on your server and we can begin configuring it to enhance its security.

Step 2 — Binding Redis and Securing it with a Firewall

An effective way to safeguard Redis is to secure the server it’s running on. You can do this by ensuring that Redis is bound only to either localhost or to a private IP address and that the server has a firewall up and running.

However, if you chose to set up a Redis cluster using this tutorial, then you will have updated the configuration file to allow connections from anywhere, which is not as secure as binding to localhost or a private IP.

To remedy this, open the Redis configuration file for editing:

Locate the line beginning with bind and make sure it’s uncommented:

If you need to bind Redis to another IP address (as in cases where you will be accessing Redis from a separate host) we strongly encourage you to bind it to a private IP address. Binding to a public IP address increases the exposure of your Redis interface to outside parties.

If you’ve followed the prerequisites and installed firewalld on your server and you do not plan to connect to Redis from another host, then you do not need to add any extra firewall rules for Redis. After all, any incoming traffic will be dropped by default unless explicitly allowed by the firewall rules. Since a default standalone installation of Redis server is listening only on the loopback interface (127.0.0.1 or localhost), there should be no concern for incoming traffic on its default port.

If, however, you do plan to access Redis from another host, you will need to make some changes to your firewalld configuration using the firewall-cmd command. Again, you should only allow access to your Redis server from your hosts by using their private IP addresses in order to limit the number of hosts your service is exposed to.

To begin, add a dedicated Redis zone to your firewalld policy:

Then, specify which port you’d like to have open. Redis uses port 6397 by default:

Next, specify any private IP addresses which should be allowed to pass through the firewall and access Redis:

After running those commands, reload the firewall to implement the new rules:

Under this configuration, when the firewall sees a packet from your client’s IP address, it will apply the rules in the dedicated Redis zone to that connection. All other connections will be processed by the default public zone. The services in the default zone apply to every connection, not just those that don’t match explicitly, so you don’t need to add other services (e.g. SSH) to the Redis zone because those rules will be applied to that connection automatically.

If you chose to set up a firewall using Iptables, you will need to grant your secondary hosts access to the port Redis is using with the following commands:

Make sure to save your Iptables firewall rules using the mechanism provided by your distribution.

Keep in mind that using either firewall tool will work. What’s important is that the firewall is up and running so that unknown individuals cannot access your server. In the next step, we will configure Redis to only be accessible with a strong password.

If you installed Redis using the How To Configure a Redis Cluster on CentOS 7 tutorial, you should have configured a password for it. At your discretion, you can make a more secure password now by following this section. If you haven’t set up a password yet, instructions in this section show how to set the database server password.

Configuring a Redis password enables one of its built-in security features — the auth command — which requires clients to authenticate before being allowed access to the database. Like the bind setting, the password is configured directly in Redis’s configuration file, /etc/redis.conf. Reopen that file:

Scroll to the SECURITY section and look for a commented directive that reads:

Uncomment it by removing the #, and change foobared to a very strong password of your choosing. Rather than make up a password yourself, you may use a tool like apg or pwgen to generate one. If you don’t want to install an application just to generate a password, though, you may use the command below.

Note that entering this command as written will generate the same password every time. To create a password different from the one that this would generate, change the word in quotes to any other word or phrase.

Though the generated password will not be pronounceable, it is a very strong and very long one, which is exactly the type of password required for Redis. After copying and pasting the output of that command as the new value for requirepass, it should read:

If you prefer a shorter password, use the output of the command below instead. Again, change the word in quotes so it will not generate the same password as this one:

After setting the password, save and close the file then restart Redis:

The following is a sequence of commands used to test whether the Redis password works. The first command tries to set a key to a value before authentication.

That won’t work as we have not yet been authenticated, so Redis returns an error.

The following command authenticates with the password specified in the Redis configuration file.

Redis will acknowledge that we have been authenticated:

After that, running the previous command again should be successful:

The get key1 command queries Redis for the value of the new key.

It should now be very difficult for unauthorized users to access your Redis installation. Please note, though, that without SSL or a VPN the unencrypted password will still be visible to outside parties if you’re connecting to Redis remotely.

The other security feature built into Redis allows you to rename or completely disable certain commands that are considered dangerous. When run by unauthorized users, such commands can be used to reconfigure, destroy, or otherwise wipe your data. Some of the commands that are known to be dangerous include:

This is not a comprehensive list, but renaming or disabling all of the commands in that list is a good starting point.

Whether you disable or rename a command is site-specific. If you know you will never use a command that can be abused, then you may disable it. Otherwise, you should rename it instead.

Like the authentication password, renaming or disabling commands is configured in the SECURITY section of the /etc/redis.conf file. To enable or disable Redis commands, open the configuration file for editing one more time:

NOTE: These are examples. You should choose to disable or rename the commands that make sense for you. You can check the commands for yourself and determine how they might be misused at redis.io/commands.

To disable or kill a command, simply rename it to an empty string, as shown below:

To rename a command, give it another name like in the examples below. Renamed commands should be difficult for others to guess, but easy for you to remember: 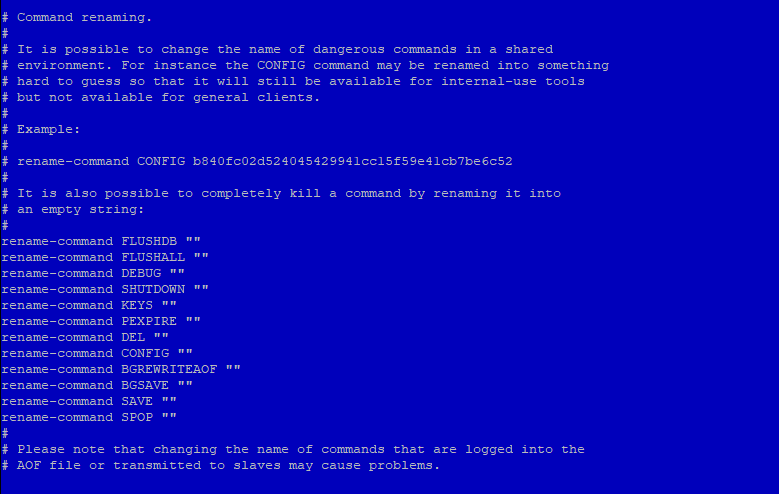 Save your changes and close the file, and then apply the change by restarting Redis:

To test the new command, enter the Redis command line:

Assuming that you renamed the CONFIG command to ASC12_CONFIG, attempting to use the config command should fail.

Calling the renamed command should be successful (it’s case-insensitive):

Finally, you can exit from redis-cli:

Note that if you’re already using the Redis command line and then restart Redis, you’ll need to re-authenticate. Otherwise, you’ll get this error if you type a command:

Regarding renaming commands, there’s a cautionary statement at the end of the SECURITY section in the /etc/redis.conf file, which reads:

Please note that changing the name of commands that are logged into the AOF file or transmitted to slaves may cause problems.

That means if the renamed command is not in the AOF file, or if it is but the AOF file has not been transmitted to slaves, then there should be no problem. Keep that in mind as you’re renaming commands. The best time to rename a command is when you’re not using AOF persistence or right after installation (that is, before your Redis-using application has been deployed).

When you’re using AOF and dealing with a master-slave installation, consider this answer from the project’s GitHub issue page. The following is a reply to the author’s question:

The commands are logged to the AOF and replicated to the slave the same way they are sent, so if you try to replay the AOF on an instance that doesn’t have the same renaming, you may face inconsistencies as the command cannot be executed (same for slaves).

The best way to handle renaming in cases like that is to make sure that renamed commands are applied to all instances of master-slave installations.

In this step, we’ll consider a couple of ownership and permissions changes you can make to improve the security profile of your Redis installation. This involves making sure that only the user that needs to access Redis has permission to read its data. That user is, by default, the redis user.

You can verify this by grep-ing for the Redis data directory in a long listing of its parent directory. The command and its output are given below.

You can see that the Redis data directory is owned by the redis user, with secondary access granted to the redis group. This ownership setting is secure, but the folder’s permissions (which are set to 755) are not. To ensure that only the Redis user has access to the folder and its contents, change the permissions setting to 770:

The other permission you should change is that of the Redis configuration file. By default, it has a file permission of 644 and is owned by root, with secondary ownership by the root group:

Then change the permissions so that only the owner of the file can read and/or write to it:

You may verify the new ownership and permissions using:

Check the status of redis.service

Congratulations, your Redis installation should now be more secure!